When you live on such a small planet, you'd want to leave to see what the universe has to offer. Repair your spacecraft and reach the stars!

Attack
Up or down arrow keys
Tap on the player

- Shooting takes up energy, but recharges slowly
- Kill enemies to pick up their loot!
- Items that you obtained can be used
> Slime cores heal 1 HP
> Lightning gems recover up to 3 energy
> Spore dust turns you invulnerable for 3 seconds
- Talk to NPCs and give them materials to craft better items!
> Red potions heal you to 7/5 health
> Batteries boost your energy to 10/3
> Blue potions turn you into a speedy ghost for 10 seconds
- Deposit your items at the ship to repair it and progress through the game!

This game was made as an entry for Ludum Dare 38. The game was completed on time, but in a rather un-fun state. Updates soon to follow for polishing!

This game is mobile friendly!

- Enemy animations updated to properly reflect which way they're facing
- Enemies given new AI
> Slimes now jump periodically
> Mush now dig underground and can be safely walked over.
> Robots now randomly patrol and change directions. Amazing.
- Added item functionality for the base materials (Slime cores, lightning gems, spore dust)
- Crafted items buffed
> Red potions heal you fully instead of only giving 1 HP
> Batteries now give 20 energy instead of refilling your energy to 10
> Blue potions also make you invulnerable in addition to making you fast
- Fixed timer not working
- You can now talk to NPCs while in your inventory menu
- NPCs now only require 3 materials instead of 5
- The ship now takes only what it needs, not clearing your inventory.
- The ship now only requires 10 of each material for the first phase, and 3 of each crafted item in the second phase.
- Map is now randomly generated
- Added missing sound effects

- Enemy AI slightly altered
> Slimes jump at constant, shorter intervals
> Robots now move in one direction, and can go into a defensive mode. Bullets don't damage it, but you can walk through it. Will defend itself when shot.
- Max energy lowered to 3, but recharge rate increased
- Spore dust now makes you invulnerable for 3 seconds
- Crafted items changed
> Red potions heal you up to 7 HP
> Blue potions restores your energy to 10
- Enemy spawning rate increased
- Enemies will now spawn in a way to avoid hitting the player on spawn
- Enemy and player hitboxes lowered to make it easier to avoid getting hit
- Bullet is now faster
- NPCs now take enough materials from your inventory at one go to make a full item, if possible.
- Small graphical fixes 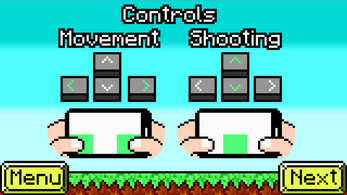 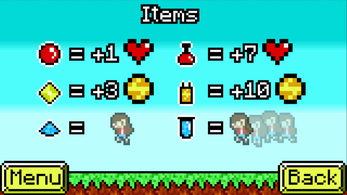 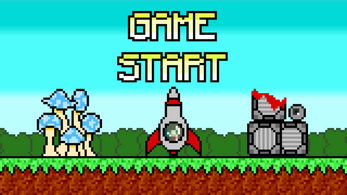 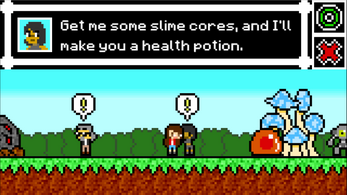 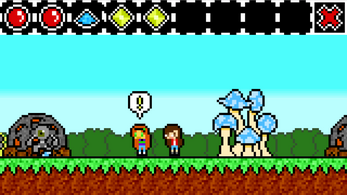